The game revolves around four commanders: Bellafide, Hopper, The Quartermaster, and Archimedes 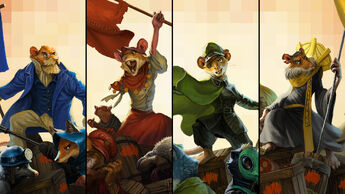 Additionally, the Tier 3 units (Tier 3 means "Expensive but preposterously awesome in every way") have more developed character. Among them are Kasha a fox who longs for a simple life, Uncle Butter a boar who enjoys the finer points of cooking, Inmate #43B a Badger who lost her parents and her sanity, Matriark an owl boss who is always willing to give a second chance, and Drill Sergeant Volkov a wolf with a penchant for yelling orders.

The game also includes a cast of other characters that have their own personalities and roles within the world. These characters are explored more in depth in the story through conversations with the various commanders and often help to flesh out why they fall under the tiers they do.

While most of the games characters found throughout the story are combat units within the multiplayer, there are a few exceptions to the rule, such as the clergy mice, the Pigs (though they appear as workers and militia style defense for the gristmills), and the Sage.