Edit
watch 01:36
We're Getting Mutants in the MCU - The Loop
Do you like this video?
Play Sound
This article is a stub. You can help Tooth and Tail Wiki by expanding it.

Hopper is a playable commander in Tooth and Tail, representing the Commonfolk, a faction which had sprung about in resistance to the "civilized" ways. The Common Folk are symbolic of a young Democratic state with elements of anarchy due to its lack of maturity. Her team color is red. Hopper, due to her democratic ideals, advocates a vote-based system for deciding who gets to be the food. With this said, however, things usually devolve to mob rule chaos which ultimately decides what happens. The Commonfolk are, to the other factions at least, the clown of the show, their inability to stabilize themselves and maintain order is what makes them such a fragile and vulnerable state. Hopper, herself, is missing an arm, having given it up to feed the people. Many of the Commonfolk appreciate Hopper's selfless nature, and respect her willingness to fight on their behalf. 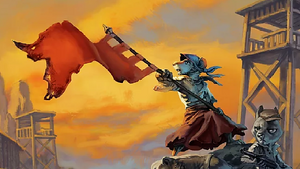 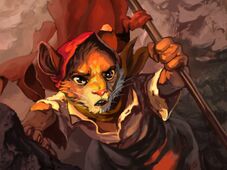