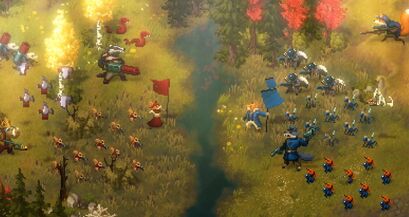 Tooth and Tail is set in a world ruled by animals, and takes place in a time of violent revolution.

The animals have taken to eating meat, with the only exception being Pigs who are treated as a subspecies (and primary food source) due to their vegetarian diet and perceived dim wit. For many years there had been an agreement between all animals, should the world fall upon hard times a lottery would be enacted to choose who among them would be sacrificed as meat.

All was well until hard times befell the animals. Forced to enact the longstanding pact, the civilized, the governing body of the world, began organizing and overseeing the lottery. Years had passed and the lottery continued but many began to suspect that the civilized were choosing "winners" not allowing for the fairness of chance. This suspicion and general malcontent came to a head at the beginning of the game, where a rich mouse named Bellafide finds his son on the menu. Outraged by the perceived injustice of his sons passing he begins the events that would change the world.

As tensions reach their breaking point, four factions fight to install their system of governing and their own ideas about who should end up as food. The Longcoats, led by Bellafide, believe that food-selection should be chosen based on an animal’s merit. The Commonfolk, championed by Hopper, believe that every animal should have the right to vote for who becomes food. The KSR, commanded by the Quartermaster, fight to maintain order no matter the cost, and finally The Civilized, commanded by Missionary Archimedes, who hope to continue their rule and maintain the status quo.

While the revolution unfolds the world is set to change; alliances are forged and broken, leaders born, ideals twisted, and new mysteries revealed. Only one faction will rise to top and those who fall will become food.

The common language the animals speak is Vyeshal.